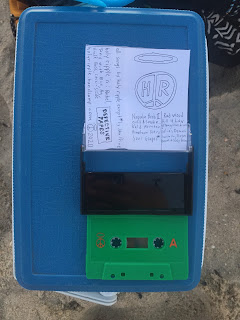 My surfing vocabulary is novice at best. I’d offend the bras and barneys if I were to assume a mondo wave out by the cove in late August was the “Holy Ripple”. I can afford to risk that offense, and suffer a gnarly knuckle sandwich. It would likely increase my street cred.

1. A strong introduction, casting Robert Duvall as a crestfallen Mountie with painted pewter figurines in his vest pockets. Open hands, the esteemed method actor reminisces on his filmography and contemplates another Coppola sequel, “Napalm Beeb II”: whatever happened to the surfing general?
2. “Gold & Smoke” rises and meanders the same beachfront properties trespassed by Real Estate’s hi-powered RC dune buggy with a six-pack of PBR in tow.
3. When the last tall boy is crushed into a silver dollar and the hand-cranked drum-machine is hacked by the neighborhood medicine man, your only recourse is a barefoot hike around “Bald Mountain”.
4. This diner doubles as a time machine. The waffles are the optical disks of memories, such as study hall paper airplane construction. Last period’s physical education is insufferable as usual. A brutal round of dodgeball results with the “Hometown Hero” standing alone, center court, clutching seven Nerf blobs in his never-washed Slipknot tour t-shirt.
5. “Sour Grapes” [RIP John Prine].
6. Side B: different from Side A, if only because “Radwood” showcases an authentic swipe at the guitar solo from YES’s “Owner of a Lonely Heart”. [Unrelated: RIP Eddie Van Halen]
7. So… what if you’re stuck in bumper to bumper, and see the license plate in front of you says: “Kill 4 Luv”? What kind of life events result in said vanity plate? Why or why not? Support your answer.
8. Further cinematic fan-fic: Consider director John Cassavettes still going strong in the 1990s, removing Tarantino from his boy-king VHS throne of delusion. In a return to form, he recruits Ben Gazzara and Peter Falk as back in business, down on their luck wise-guys, and of course, Gena Rowlands as the “Getaway Blues Driver”.
9. While stepping into the pond of unconsciousness, behold a dusty old Mason Jar labeled “Delia’s Demon”.
10. The two or three chord droning penultimate track, “Swim on, Slayer” may be a miniature in this version, but I think it deserves a 13+ minute burner variant, preferably live in front of a studio audience avec fog machine and home movies projected onto a fitted bed sheet.
11. Finally, phanstasmagorically, HR connects the dots between the standard, “Dream a Little Dream of Me” and Suicide’s “Dream Baby Dream”. (yeah that’s a good one too, Bruce, but…) But “Dream a Crazy Dream” is an unexpected dance floor call to action, be it in a large anxious crowd or an unlit bedroom late at night with earbuds and the Twilight Trilogy. 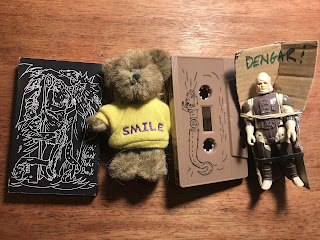 (Reviewer’s note: This review was completed way back in ye olde October of 2020. I am thankful to share this one with the artists who contributed to the compilation and their fans, friends, family, and listeners. Please enjoy!

Y’know they say things come in cycles. This one’s the love child of Ghost Rider and Ed “Big Daddy” Roth. Dihd records, longtime champion of much adored/misunderstood mystery meat of the masses, provides the survival kit for times like these and those. What times are these? The cover illustration by Jaime RVRS MRCY suggests a literal “bunk” in which to tangle with the proverbial “gunk”, an allegorical cot with bedroll for ol’Rip Van Winkle to snooze on. It appears Rip Van is visited in slumber a-la Uncle Ebeneezer Scrooge, by a Dragon Ball-Z coiffed mer-man entwined with a dragonian serpent… do I detect halitosis? He’s/they’re hovering mere inches from RVW’s face. As if that weren’t enuf, looks like th’peasants have risen from their subterranean hell-holes to drag the poor beardo down to the frizzle-fryer.

Chapter 1: PENGO. A shaking quaking steamer by the name of One Egg Cream for Phossy Jaw. Sometimes I pretend the Black Angel Death Song is a lil more peppy. Pengo knows.

Ch.2: PREENING. WC taking out-jazz to the streets of Cleveland, almost conjuring up the spirit of Mingus’ Haitian Fight Song.

Ch.3: All night, like, put it on repeat ‘til it wears into a fuzzy strip of plastic. BAD EYESIGHT? Alright, just listen to the disintegration.

Ch.4: ASPS (not ASPCA). Take a deep dive into the mind of Klaus Kinski. Recreate a Werner Herzog remake and title it Snakeferatu. This is the opening credits theme. Picture an auditorium of asps.

A guided meditation of a quasi-baptism.

[Reviewer’s note(second one): cassette side b features another of Jaime’s drawings. This time it’s Rip Van Winkle’s torso, chopped and sandwiched around the letter “b” with the serpent’s tail on the other side. It signifies a turning point in the hero’s journey.]

Ch.1: Return to UNITED WATERS for a spiritual groove. Checkers is more than just red and black. It’s a way to let your mind be free.

Ch.3: More terrifying than expected, DOUBLE WIG hypothesizes. When your mask is not another face, aka if Lemmy were to steal your face right off of your head.

Ch.4: A bit’o’symmetry here, SWEATING PIPE. Pipe Sweating. A tip of the hat to the cymbal mic on this one. MVP.

Ch.5: In closing, fittingly, the one-man HUMAN ADULT BAND is accompanied by an on-air Coast to Coast AM with George Noory phone call from Patty, discussing chemtrails in Seattle. T Penn goes full singer-songwriter with Peace to You, a clarion call to fellow Earthlings. Peeling back the curtain on this one, T Penn sez:

“It's me on vox and a borrowed acoustic guitar bc I left mine at a campfire jam, hosted by SHADOW BAND, the night before. One of the cooler activities done as a part of the SHADOW BAND gathering/bonfire was a sauerkraut canning workshop.”

While we have th’Gunkmeister on the horn, what are the curator’s intentions with this collection?

“Speaking of comps and candy hopefully the new Gunk is mostly Reese’s but there might be a Necco wafer in there somewhere. Happy Halloween.” 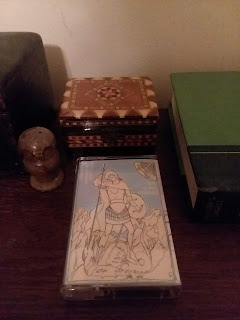 Former member of Pots & Powercells and AOI, folks, offering instrumental new weird Americana from CT by way of NY & NJ & housed in a beautifully drawn j-card. Piano, acoustic guitar, electric bass guitar, drums and synth, mostly played solo and sometimes as a duo. It has the intimacy of bedroom rockers, Pendulum Floors & the wobble of the finest organ playing by Michael Hurley. Raw edges & some cheap gear make it a winner (be it the strings or the recording device). These jams sound triumphant and somber at the same time. Although these musical bits stand very well on their own, Kangbucket provides his address to potential collaborators. In my head, I can hear the electric version of these tunes, which I know, would also, slay. God bless.
Posted by T. Penn at 4/20/2020 10:28:00 PM No comments: 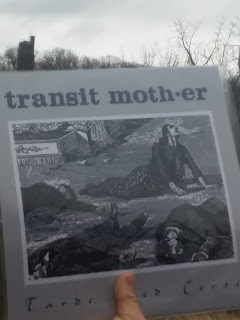 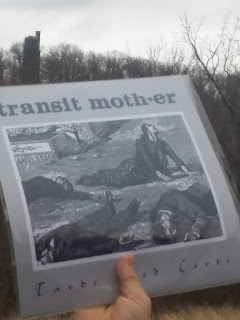 Received another fine transmission from the kind & generous folks at Cephia's Treat Records. Not sure when this was released, because, like Sun Ra's original stuff, these records ain't dated. These folks've been putting some of the weirdest musical & visual artifacts on the East Coast since the 90's, slow and sure like. Transit Moms deliver. They play a variety of sub-underground genres on this 7inch all with a worn-out-with-time sound quality like a VHS in 2020. The grit and 'verb is top notch here folks. Back to th' genres. They play a reverbin and sorta hypnogogic indie psych (think Bloody Valentine/Bardo, executed as a duo) then they wake up reverbin an E & A string garage bonk but still with the old VHS sound. Their track from 'Heavy On Th' Gunk' cassette comp (put out by me) is a 'Daydream Nation' label hugger on this 7inch, with new (to my ears) vocal parts. The sleeve is a real treat too with Pengo style ancient etching cover and a nice collage revealing some of Cephia's secrets. Get this 7inch and stay on the train to Tampa.
Posted by T. Penn at 4/03/2020 06:49:00 PM No comments:

Sorrry. th' show on Sat April 11th @ ITW has been canceled. Bummer. Maybe we can reschedule it when sh*t gets better. On a related note this repost of the poster was pretty cool. Thanks Kim! 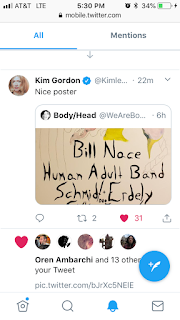 Big Blood 'Do You Wanna Have A Skeleton Dream' (Feeding Tube) 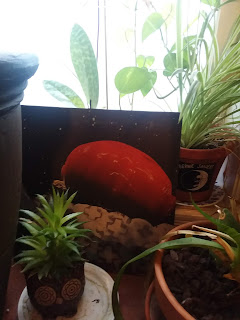 Well, freak folk family, Big Blood, cranked out another one. No not a another child! That's terrible to think of that term, in that way! Shheessh. Another Lp but their child appears on the record. This LP is my favorite in years. Cant really go wrong with any Big Blood LP, but this one is really special in my opinion. Vocalist, Colleen once spoke about her bandmate and husband, Caleb's tendency to take a dark subject and fit it with a pop tune. On 'Sugar' Colleen does that with a doo wop-esque melody. It's more like a call to be more compassionate in dire times. Shit. Loud and clear Colleen. Thank u. This record has a less busy sound than last year's 'Daughter's Union' LP. It works really well, if that's what u dig. As I said earlier their daughter has written her own tunes on this album; about a sly boy and some video game addicted peers. Keen tween this Quinn is. I identify as somewhat of an objective spiritual tourist, that being said, the religious label hugger of the B side stopped me in my tracks. Well stopped me in my Saturday morning pancake making. As a result, a few were overdone. No spoilers here though. Buy the record to hear it yourself folks. I am grateful for these friends. I am grateful for the at-least-yearly Big Blood transmission. A+.
Posted by T. Penn at 3/07/2020 02:23:00 PM No comments: 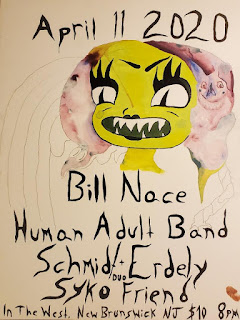 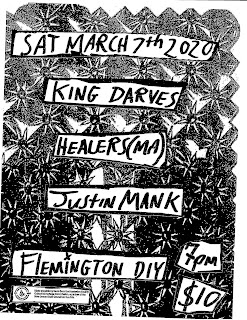